With support from Austrian brewery Eggenberg, ‘Beer Pope’ Conrad Seidel presented ‘Vienna’s most serious beer-tasting’ at the Glacis Beisl. The journey went from Eggenberg to St-Louis in 20 delicious stations of beer.

‘Beer Pope’ Conrad Seidl, a well known Austrian journalist and leading German language specialist on beer, is also known as great speaker and lector, always drawing vast crowds. The crowd at the beer tasting event in Glacis Beisl however surpassed everything so far, with the event selling out days after it was announced. An interesting side note: while beer is often considered a man’s beverage in Europe, more than a third of the audience was female. 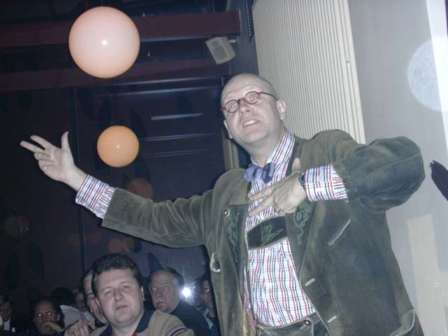 Right to the point the event started with a non-alcoholic beer, although Mr. Seidl explained right away that there is nothing like a completely alcohol free beer, only beer with a very low alcoholic content. His reason for starting with a non-alcoholic variety? It’s educational – everybody should remember how little he or she poured from that one and never pour more from any of the later, more potent beverages.

After a quick start we embarked on a fascinating tour through beers of very different styles from all over the world, 20 samples altogether. A lot was to be discovered and realized in the process, for example how different a Czech Budweiser was from an American Bud, or about the differences between Pilsener Urquell, the ‘inventors of Pilsen style’ and a modern Pils. We also learned why Bavarian wheat beer is not brewed according to the German Reinheitsgebot (German Purity Law) that strictly specifies rye as base for the malt and was passed in order to give the Duke of Bavaria the monopoly on wheat beer brewing. We tasted and realized that dark beer is not necessarily sweet in taste and where the name ‘Stout’ comes from (referring originally to a stouter type of porter)

Of special interest was the vertical of assorted beer types brewed by Eggenberg that ended with two legends, Eggenberger Urbock, a double bock of desert wine character and the Samichlaus, an even stronger and more aromatic double bock originally invented by Swiss brewer Hürlimann. Unfortunately Hürlimann stopped the production after being taken over. However Eggenberg acquired the recipe and license and is now brewing this unique delicacy. On the aromatic side, the tasting also included very interesting aromatic beers from Belgium. Of course Guinness stout wasn’t missing either as representative of British Isles beers.

To sum things up, a very high level tasting that gave those new to fine beers a great introduction to styles and types while still containing enough new and interesting information for beer connaisseurs, and even those beer specialists who already knew most of the information found enough incentive for a satisfying event – like a good glass of exclusive Samichlaus and the amusing and amazing presentation by Conrad Seidl … and free fresh pretzels.

More pictures of the event are available here